We thaw and repair frozen pipes all across Toronto and the GTA. Contact for a free consultation today.

The winter temperatures in Toronto can drop well below the freezing point. When the temperatures do drop that low, homes and businesses are at a greater risk for frozen pipes. When the water in a pipe starts to freeze, it can clog the line and in the worst cases, it can cause leaks or result in a burst water pipe.

Wondering what to do about frozen pipes? With the experienced plumbers from ADP Toronto Plumbing, you have a team of professionals that have plenty of experience dealing with pipes that have frozen or even burst. We know how to thaw frozen pipes in order to prevent further damage, and we can also repair pipes that have been damaged by frozen water.

If you suspect a pipe has frozen but don’t know where we have the skills and the know-how to locate the frozen section of pipe and implement changes to keep it from freezing in the future.

The Risk of Frozen Pipes

When pipes freeze, it can cause some real problems. The simplest of these problems is just a disruption to the water supply. When water freezes in a pipe, it can act as a clog, and this can cut off the supply of water to everything beyond that point. However, a simple blockage is the least of your worries when it comes to frozen pipes.

When the water freezes, the ice expands and this can put pressure on the pipe. If the pressure is great enough, it can form a leak, and in the worst-case scenario, it could burst outright. A burst pipe could spill gallons of water inside a wall or in your basement, and that will lead to a messy cleanup and possible water damage. 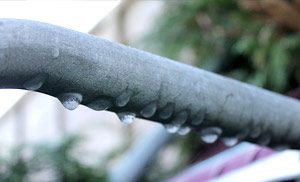 Some of the pipes in a home will be at a greater risk for freezing than other pipes. If you have unheated areas of the home, that area will have an increased risk for frozen pipes. Pipes that are in cabinets under a sink will also be at a greater risk. The cabinet door can prevent heated air from entering the space, and this can cause the pipe to freeze. You also have an increased risk of freezing with any pipes that run in walls on the exterior of the structure.

If you want to prevent frozen pipes, there are a few steps that you can take. Insulating any pipes that are in unheated portions of the home can help to prevent freezing. You could also leave cabinet doors open if there are any pipes in the cabinet. If you are going away for a few days, remember to leave your heat turned on. You should set the temperature to about 15°C when the home is unoccupied.

If you are having problems with frozen pipes in your home, contact ADP Toronto Plumbing. Our teams have the tools and the knowledge that is necessary to keep pipes from freezing, safely thaw frozen pipes, and we can quickly fix pipes that have already suffered damage as the result of frozen water. Even if it is an emergency, you can call us any time to come work on your frozen pipes.

Why Call a Professional to Thaw Your Pipes?

When encountering frozen pipes, the question of what to do can be contentious. Do you thaw them quickly or slowly? What do you use to do the job? Here are two reasons why you should call on the help of a professional.

Your Pipes May Burst

The biggest problem you might encounter when attempting to thaw your pipes on your own is that you might end up with a burst pipe. This not only leads to flooding issues, but it can also be incredibly dangerous if you are close to the pipe when it bursts. We strongly advise against attempting to thaw your pipes because of this issue alone, let a professional who has the experience and tools take care of the job properly.

Some people may attempt to thaw their pipes with a myriad of dangerous tools and methods. Remember that water and electricity do not mix, and using a tool such as a propane torch is a recipe for disaster. When thawing a pipe first see if you can turn up the central heating in the area if this is possible you can safely slowly thaw the pipe. But you’ll need to make sure that any associated taps are open – if they’re inaccessible you’ll want to be cautious about proceeding.

Trust a professional plumber who has the tools and knowledge to repair your frozen pipes properly. Contact us for a free consultation today.